THE GOLCO CONTINUES AND BOCA RATON SC LEADS THE PACK

On Sunday January 29, 2017 two games were played at Aiello Field and BOCA RATON SC continues undefeated and playing very well. The dedication of the team and the commitment of the staff is obvious. BOCA RATON SC defeated Lauderhill Jr by the score of 2-0 in a close game. Timoy Gren and John Merdelus were nominated as MVPs for Lauderhill and Vinicius Tupan and Mateo Tenorio the MVPs for Boca Raton SC.

Next weekend games will feature DSL Sc vs School of Soccer and Boca Raton SC vs The Academy Foxes. 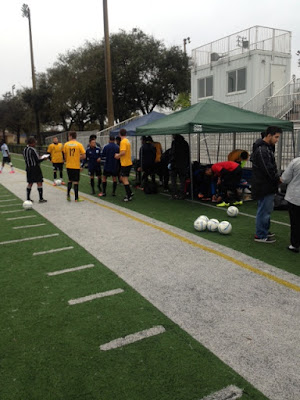 The officials are checking the ID passes of the Boca Raton SC team before the match
Labels: NEWS
Newer Post Older Post Home