Another round of the GOLCO was played Sunday January 15. Curiously both matches ended up with same final score 4 to 3. The first match was between Doral SC Elite and first place Boca Raton SC. In an early start Doral SC Elite scored two fast goals but the Brazilian squad recovered and turned around the game for a 4-2 difference that was reduced when Doral SC scored a late goal. The game was very disputed and played with great intensity. The young Doral SC Elite team keeps showing high quality and tremendous ability to play at this level. The MVPs of the match were Jash Pasmore and Mateo Tenovio for Boca Raton SC and Adrian Cabrera and Junior Perez for Doral SC. The second match features The Academy Foxes and DSL SC. Pretty even match, with an excellent young team coached by former Colombian international Diego Serna Lopera. With a bit of fortune, the veterans from The Academy managed to win 4-3. The MVPs of the game were Diego Serna and Santiago Castro for DSL SC and Roii Blicher and Mohamed Benzahour for The Academy.


Boca Raton SC, the leaders of the tournament 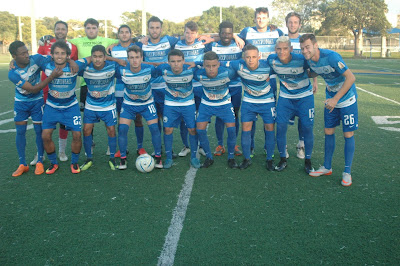