View the entire match in YOU TUBE  THIS IS THE LINK     https://youtu.be/fwK9oLOHO3U

On Sunday June 3rd 2018, after a cancelation on May 20th 2018 due to the heavy storm, the first ever Florida amateur interleague championship was played between the GC Inter AFC, 2018 champions of the BASL and Lauderdale SC GOLCO Champions was played in Cypress Park, Coral Springs.
It was a festivity of soccer and friendship. In a sunny Florida warm afternoon, two teams of different technical and tactical characteristics were confronted. Inter AFC, a team that preferred to play direct soccer with very strong and physically fit players and LSC a team that preferred to practice ball control and keeping the ball on the “carpet” in a classic danubian-southamerican style. The game was pretty even and well played. Very few fouls were called and absolutely no frictions and or bad infractions were noticed. LSC scored early in the match but very short after Inter was able to even the match. Later in the first half LSC scored two goals to win the first half by a score of 3-1. Early in the second half LSC score another goal. From then on Inter AFC made a strong effort to reduce the difference and attacked LSC fiercely. They score a 2 goal on a PK and continue attacking but the LSC defense was able to respond well and no changes in the score occurred. The final score was 4-2 in favor of the “homeless” from Broward County.
The goals of the winning team were scored by Andres Watson, Armando Garzon and Marc Oliver Gracia (2). The winning team roster included Daniel Aguirre, Kobe Axaica, Douglas Bonilla, Roee, Blicher, Cesar Mantilla Santiago Castro, John Davalos, Nicolas Ezcurra, Armando Garzon, Marc Oliver Gracia, Daniel Martin, Andres Neira, Julian Penagos, Byron Perea, Daniel Viorel, Ross Scianimanico, Jacob Testa, Lucas Orellana. Coaches Dr Meeroff and Bolivar Puebla. Team mascot Nico Sevilla. Team manager Diego Meeroff. Team administrator Susana Meeroff.
THE MATCH WAS PROFESIONALLY RECORDED AND IT WILL BE SOON AVAILABLE TO ALL. 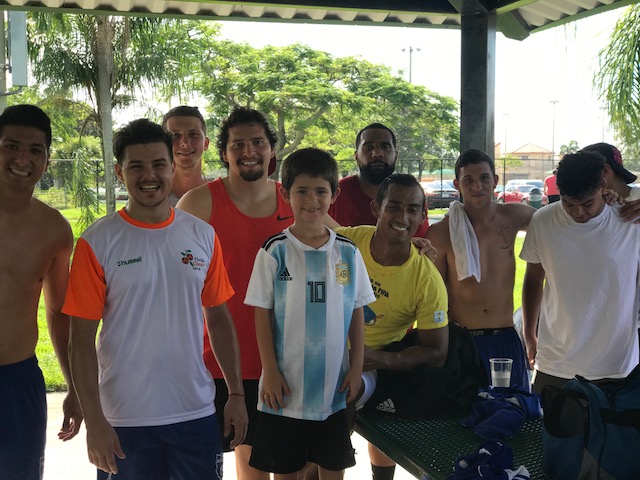