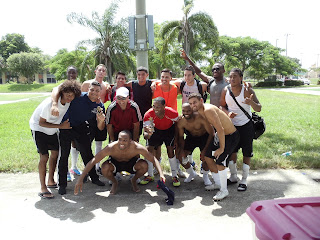 The Academy team, coached by Dan and Joe Meeroff, won the GCSDL summer tournament undefeated. They won the round robin season and were seeded first in the playoffs.

In the quarterfinals The Academy defeated the Lake Worth Sharks, in the semis they defeated the White Eagles and in the finals they beat Touch of Class by 5 to 4 in a hard played, excellent game.

Touch of Class was a surprise finalist and they raised to the occasion playing an excellent match. They are young, well trained, very disciplined and have a very good coach, former brazilian pro-player, Carlos Nene. In the final The Academy's goals were scored by Travis Brown (3), Diego Serna (1) and Mark Lyon (1).

The new season will start in September and the league is now accepting applications to play.
Newer Post Older Post Home