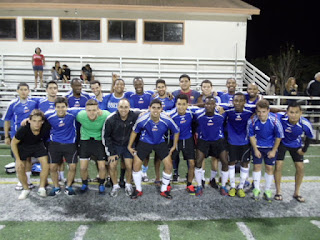 The Torneo Clausura 2012-2013 came to an end last Sunday, February 10, 2013. It was a long tournament that started in August 2012. Ten team participated in the Torneo Clausura including the Plantation Eagles FC; Champions of the CASA league last season and Weston Academy.

The final featured the Barcelona Lake Worth Sharks (4 SEDED) and The Academy. (6 SEEDED)

In the semifinals Barcelona defeated Weston FC and The Academy defeated Parkland Predators.

Coach Meeroff said “During the regular season we could not beat the Barcelona team. First we lost 1-3 and recently before the playoffs we tied 1-1. We studied the games and worked on the problems we had in those games.  Basically we needed to neutralize Barcelona’s speed of play and strength”.

“We planned to play a kick passing game, mostly a two-touch, kick counterattack style. It worked perfectly: in the first half we made all the difference and in the second half we controlled the pace of the game. Actually, they never challenged us and our keepers had a quiet night”, added Meeroff.

“We are now ready for South Florida Cup and FSSA Cup. The key is to work hard in practice and apply that work during the matches” said assistant coach Sevilla.

Coach Meeroff said “The Academy is a proud member of the Gold Coast Soccer Development League that celebrates the 30th anniversary of uninterrupted activity and is growing again to regain the prestige of the 1990s. The new season will start in March 2013 with teams from the tri-county area The Academy will be there again as we were there for the last 15 years. We won the Gold Coast Premier Division three times: 2009, 2011 and 2012.We play in the Gold Coast SDL because is an affiliated league (affiliated with Florida State Soccer Association, USASA and USSF) with visibility and credibility. Many famous teams and players played in the Gold Coast and we keep developing players with collegiate